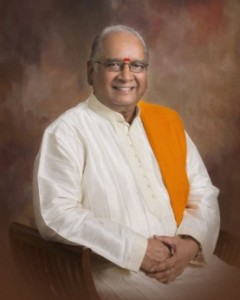 Available in major bookstores acorss India, also can be bought through amazon.com (Shipped across the world) and flipkart.com

In this amazing decoding of an important hymn (Purusha Suktam) of the Vedas by the Spiritual Master Dr. Shri Balaji Tambe the secret to your existence, and more importantly, your fulfillment, is revealed…

Dr. Vijay Bhatkar, the architect of Supercomputing in India. Pioneer of Exascale Computing and GIST multilingual technology. Recipient of the Padmashri and Chairman of the Board of Governers of IIT Delhi.

“What I particularly enjoyed was the fact that the book breaks some long-standing myths about the Vedas. Yadnya has been explained as a universal and natural process that can be applied to several forms of human activity – from the fire-altar based community therapy, to everyday life activities. I recommend it highly to a diversity of readers, from a scholar to a common man.”

Dr. R. A. Mashelkar –The CSIR Bhatnagar Fellow at the National Chemical Laboratories, Pune, recipient of the Padma Bhushan and a  fellow of the Royal Society.

He has taken on the near impossible task of researching and reminding us of the great treasure that is the ancient Vedic culture. He cuts through myth and superstition and works to take forward the inspiration and knowledge that the ancients let behind for us to discover. He shows easily how those traditions are truly applicable in every phase of human development, and that they are based on the human being’s involvement in all natural phenomena.

With modern sciences now paying increasing attention to ‘wave’ and ‘field’, ‘quantum’ and ‘mind’, Dr. Tambe decided it was time to begin his contribution to the deciphering of the Vedas.

The book explains how the universe effects evolutionary change through a process called Yadnya, described in the Suktam. The concept of Yadnya applies to all creative phenomena, from the formation of galaxies to the digestion of food. It is the Universal Program that is the step-ladder to the Supreme Consciousness.